In February 2017, crude oil exports from the US hit the highest level in the country’s history with 1,116 kb/d of oil leaving the US border. While Congress liberalized crude exports about a year and half ago, exports have really only bounded up in 2017 from their 2014-2016 averages. Following the surge in tight oil production, most exports moved to Canada, effectively the only legally accessible export market prior to 2016. However, throughout 2016 and going into 2017, the destinations of American crude exports began to vary, with non-Canadian volumes primarily heading for Atlantic basin markets but also several locations in Asia. In February, about a third of crude exports were headed for China.

With such buoyant February export numbers, the US has actually surpassed several members of OPEC in terms of crude oil exports. Although February data is missing for the UAE, Venezuela, and Libya, American crude exports trailed those of Saudi Arabia, Iraq, Iran, Kuwait, Nigeria, and Angola.

US exports surpassed those of OPEC members Algeria, Ecuador, Qatar and other exporters such as Azerbaijan, Colombia, and Oman.

As US crude oil production rebounds in 2017 and going forward, exports are likely to climb even higher through the year and into 2018, especially as requisite infrastructure comes into place and per barrel transportation costs are driven lower.

The 1975 EPCA, as described in more detail previously, gave the executive large discretionary power to shape American energy exports. During most of the Act’s existence, US crude oil exports have been prohibited on energy security grounds, with minor exceptions. However, the EPCA does not prohibit the export of petroleum products. Even in the depths of the 1970s energy crisis, the US exported small quantities of finished gasoline. Exports continued to increase throughout the 1980s and 1990s to reach a peak of 161 million barrels in 2014. 2015 will likely supersede this number. 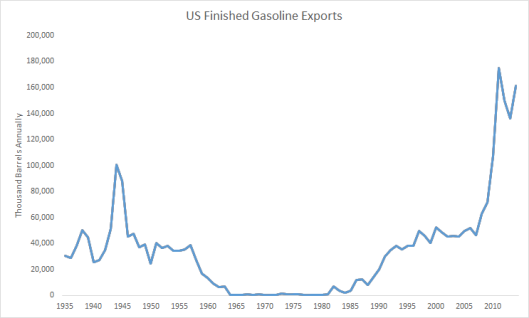 Concurrently, imports of gasoline have continued to decline since reaching a peak of 219 million barrels in 2005, down to 17 million in 2014. Despite the calls for increased energy security throughout the last decade, the US became a net exporter of gasoline in 2010.

Several factors contribute the rise of gasoline exports. In recent years, in which WTI has traded at a discount to Brent, refining of crude domestically and exporting it to worldwide markets becomes lucrative. Overall demand for gasoline in the US has stagnated throughout the 2000s and 2010s as vehicles became more efficient and drivers more conscious of their driving patterns amid high gasoline prices.

More importantly, the level of gasoline exports serves to highlight the impact of the EPCA and the rent-seeking it has enabled in the refining sector. With the recent repeal of provisions prohibiting crude oil exports, the pricing dynamic of the refinery sector will change and gasoline exports may decline. In any case, the energy security that the EPCA sought to provide did not materialize throughout the 2000s. Refiners were able to take advantage of arbitrage conditions and export finished products to countries where they would receive the highest price, hence the high levels of gasoline exports throughout the decade.